I think it was back in 2005 I painted up my first Imperial Fists space marine, a plasma gunner. I'd been collecting these old marines for a couple of years and had finally settled on Imperial Fists for the colour scheme. It was more a case of having a yellow ochre colour in mind somewhat influenced by some marines I'd seen painted in either White Dwarf or possibly GM magazine from that '89/'90 era and Imperial Fists kind of fitted well enough. Over the course of a few years, I forget how many exactly but certainly by 2009 I'd painted up a full 10 man tactical squad.

I had plans to expand the force to include a dreadnought and five 'command' models including an officer, medic, chaplain, librarian and tech marine. These models were all selected, prepped and undercoated before being promptly left to gather dust. All these years later I wasn't sure what exactly to do with the squad. I recalled the painting of the armour was a little laborious and possibly over worked in comparison to how I paint now and there are some things I'd do differently if I were doing this all over again. The option of selling them and re-collecting the figures was considered.

Recently though I dug out one of the command models I'd prepped and decided to see if I could replicate the paint work. I remembered the colours I'd used so no problems there. I've been asked a lot over the years what those colours were so here they are:

Base coat VGC Leather Brown (used to be Cobra Leather)

I finished up with some ink glazes. I'll mention that in a bit. I'm not sure a glaze is currently considered the same as what I always understood a glaze to be but for me it's a very dilute wash of ink that barely tints the finished paint work.

This is the start of the Lieutenant, a model released in 1989. 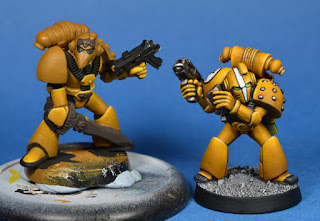 Here's a quick snap of the finished armour. 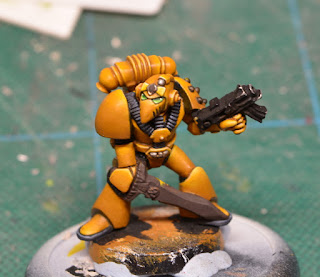 I'm quite happy with the armour colour and it's a close match. It turned out to not be as much hassle as I recalled as well. I couldn't get an exact colour match for potentially a number of reasons but I think the most likely one is the VGC Gold Yellow. I finally had to replace my original pot last year after 17 years or so and I think it's slightly different. I relied on the glazes to try and tint the paint work in the right direction. Originally I used Citadel brown ink as my finishing glaze but that's long gone now. Instead I used Winsor & Newton Nut Brown ink but the colour was still a bit off. Tried W&N Sunshine Yellow but that did nothing. Ended up using a glaze of GW Reikland Fleshshade. When the whole model is done I might add some extra sharp highlights if needed.

Not a great deal to do on this now but there are a couple of things that will slow down my finishing the model. I need to add the shoulder insignia but my old transfers seemed rather brittle last time I tried to use them. Not great when the only way to fit decals on these very convex shoulder pads is to slice them and then use decal softener to avoid creasing (followed by a certain amount of repainting). The other issue is the power sword. I'd like to paint it as a power weapon rather than just in metals but I never really got to grips with that whole thing so that could be a frustrating learning curve.

Whilst I'm not promising anything I am thinking I might get a few more of my command section done. Two more models would make a nice addition, all five would be fantastic, plus the dread' maybe to round it all out for now. Check back in 15 years to see if that comes to fruition. ;)